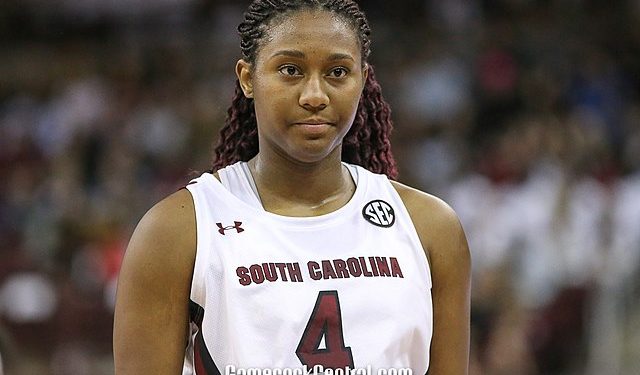 The South Carolina Gamecocks are national champions once against, after a 64-49 victory over UConn on Sunday, April 3 at Target Center in Minneapolis, Minn.

“Our path was divinely ordered,” Staley told fans after the game while waiting to accept the championship trophy.

A year ago South Carolina faced a heartbreaking loss in the Final Four of the March Madness tournament against eventual winners, Stanford. Now, they are two-time champions going 2-0 in the two trips to national title games. This was also the first championship loss for UConn coach Geno Auriemma who had won the previous 11 he coached with the Huskies.

South Carolina came into the game with some impressive stats going 14-0 against teams ranked in the Associated Press Top 25. They are also the eighth team to win more than one national championship in NCAA women’s basketball history, UConn has the most at 11. South Carolina went 35-2 through the whole season and stayed at the No. 1 AP ranking since the preseason.

The game was in hand for the Gamecocks who held a lead throughout the whole game. They never let the Huskies within six points to their lead, starting the game off strong going on a 13-2 run. By the end of the first quarter South Carolina was dominating UConn not only in the score, 22-8, but also in rebounding with a 12-3 advantage.

Early in the second quarter of the game the Gamecocks extended their lead to 30-12. This meant that in order to comeback, the Huskies needed to have an historic rally, which never materialized. Notre Dame overcame the largest point deficit in a championship game in 2018 with 15 points.

Behind National Player of the Year, Aliyah Boston, South Carolina dominated in the rebounding game. Despite as a team only shooting 22 of 60 (36.7%) from the field and only hitting 3 of 15 (18.8%) on 3-point attempts the Gamecocks were able to comfortably win the game. Because they were able to capitalize on their rebounds, the misses didn’t matter in the end. At 17.1 per game South Carolina was the third-best offensive rebounding team in the country. By the end of the game they had a 21-6 advantage in offensive rebounding and 49-24 in total rebounds.

Boston herself had 16 rebounds, five on the offensive side. After failing to score a putback at the buzzer in the semifinal against Stanford, Boston saw some redemption winning the Final Four Most Outstanding Player award. Senior guard Destanni Henderson had a career high-26 points, with four assists and two rebounds.

Henderson was also tasked with guarding UConn star and 2020-2021 National Player of the Year Paige Bueckers. Bueckers started the game off slow and was kept in check, finishing with 14 points. Fellow UConn teammates Christyn Williams and Azzi Fudd remained scoreless in the first three quarters of the game. Both had combined for an average 27.1 points per game, before the championship. Fudd, a top-ranked 2021 recruit, only played 17 minutes in the game, five in the first half, after dealing with a stomach bug beforehand.

As for next year’s goal, Boston told ESPN “same as this year”.