Homeless youth become victims of human trafficking more often than other young people, and often times, no one even notices.

The winter months are hopefully coming to an end in the Hawkeye State. Many people, in a spirit of generosity, gathered up canned foods and blankets to donate to local homeless shelters throughout the winter months. But officials with Youth and Shelter Services (YSS) say homeless people, especially homeless youth, are vulnerable to more than just the elements.

Mike Ferjak, executive consultant for human trafficking at YSS, said one in three young people are approached for commercial sexual activity, or approached by human traffickers, within 72 hours of becoming homeless. It takes even less time during the brutal winter months.

“These traffickers are very good at picking out people with vulnerabilities,” Ferjak said. “Vulnerabilities aren’t always obvious, but how hard is it to pick-up on this kid who’s walking around with a sweater, jacket and a coat, everything they have they’re wearing because they can’t carry it? They’re hanging out under the bridge. It doesn’t take a rocket scientist to figure out these kids are without support.”

Young people who become victims of human trafficking find themselves in extremely difficult situations. The Iowa Office of the Attorney General defines it as a “modern-day form of slavery.” Victims are forced into prostitution and/or forced to work for little to no pay. Human trafficking is a felony under Iowa law, and minors who are prostituted or trafficked are considered victims in Iowa.

“Each youth has their very unique story,” Patten said. “A lot of it starts from family dynamics.”

Patten said young people may choose to leave an unhealthy home life, one with drugs, alcoholism and/or abuse, and have nowhere to turn. Other times, they are kicked out for their behavior or because someone in the household simply doesn’t want them there anymore. Sometimes a family cannot afford for a young person to stay with them anymore, and once he or she turns 18, they have to leave. Sometimes the whole family is actually homeless, leaving young children vulnerable.

“They just have that lack of social support system to keep them from being on the street,” Patten said. “It’s definitely not the stereotypical, homeless runaway youth sort of a thing, who are just angsty, they just want to leave, they want their own rules. That’s not these youth. It’s very hard to live this life, so it’s not by choice for sure.”

The Institute for Community Alliances conducts an annual point-in-time count, where the Des Moines non-profit counts the number of homeless people on a given night. In January 2017, the organization found almost 40 homeless youth in Des Moines. Some had found shelter for the night in transitional housing, safe havens or emergency shelters while others were still vulnerable on the streets.

Ferjak said homeless youth might avoid shelters for a number of reasons.

“(People tell young people that) only ‘those’ people go in shelters,” he explained. “They hear about the nightmares, the sexual assault that happens in shelters, the terrible conditions in shelters. It’s not going to be their first stop. To a more educated, mature person, that would be our first stop. But the world looks very different when you’re a young person who’s had everything taken away from them.”

Ferjak said human traffickers will sometimes pose as shelter workers to get victims to come with them.

“It’s a common ploy. You see it a lot,” he said, “from saying they work for places like YSS to (saying), ‘I’m a police officer.’ The kid is really not in a place to be asking a lot of questions because they’re cold, it’s freezing, it’s the middle of winter and you’re on the street. And what you’re being offered is a warm place and something to eat. But what they don’t tell you is, once you get there, is you’re going to have to have sex with someone so they can make some money.”

Patten said if they don’t head to a shelter or a bed isn’t available, homeless youth are left to the streets.

“If they don’t feel comfortable at the shelter and they don’t want to camp, they walk the street at night,” Patten said. “That leaves them vulnerable to a lot of different people or crimes since they’re more likely to get robbed or assaulted. They get different crimes for trespassing or loitering. And of course, human trafficking. That is a reality. If you’re on the streets, you’re vulnerable to that as well.”

Traffickers offer security, money and shelter to get someone to come with them.

“The people who are trafficking are really good at making you feel like you can trust them,” Patten said. “They’re very manipulative. They might be very charming. They might compliment you … reel you in slowly.”

Ferjak said once someone is trafficked, it becomes increasingly difficult to leave. Traffickers use multiple tactics besides physical restraint to force victims to stay and obey.

An emotional bond can form between victims and their traffickers: a trauma bond. Traffickers create an environment where the victim is completely dependent on them for everything. When a family is trafficking someone, a victim won’t want to turn on the family members taking care of them.

“(The victim is) not going to tell anyone because they love this person,” Ferjak said, “and they don’t see the fact that they’re being turned out and sexually assaulted. (They don’t) register it the same way it would with other people.”

Patten said people who are trafficked feel they have to find a way to cope in order to survive.

“Sometimes you have to tell yourself that it’s not that bad, just as a protective measure,” she said. “It’s giving them maybe financial stability they maybe wouldn’t have. It’s giving them a place to stay. They might feel valued because people are spending time with them even if it is in a negative way. It could be fear.”

Patten said she’s met several young people in her work who have been or are currently being trafficked.

“When they’re put in these places where they are so vulnerable, they do have to decide if they’re going to exchange sex for a place to stay,” Patten said. “We just really try to do our best to be understanding and nonjudgmental in connecting them to resources.

“We’ve had people, of course, who, they’ll tell us what’s happening but they don’t want assistance. Some people want more hands-on, so connecting them with mental health resources or helping them with finding stable jobs, housing.”

Ferjak explained that often times people don’t realize someone is being trafficked because they haven’t gone missing. He said this occurs most commonly with family controlled trafficking, where a family sells the services of a young person. Sometimes the family is related to the victim but not always.

And the signs that someone is being trafficked are not obvious if not non-existent. Ferjak explained that victims of human trafficking can be depressed because of their situation, but not everyone will realize the cause of the depression. He also said victims are taught to answer questions about where they’re staying or where they get their income to avoid being caught.

“It would (be) great if they did have a barcode on their foreheads because that would make it easier,” Ferjak said. “But visible, outward signs? No.” 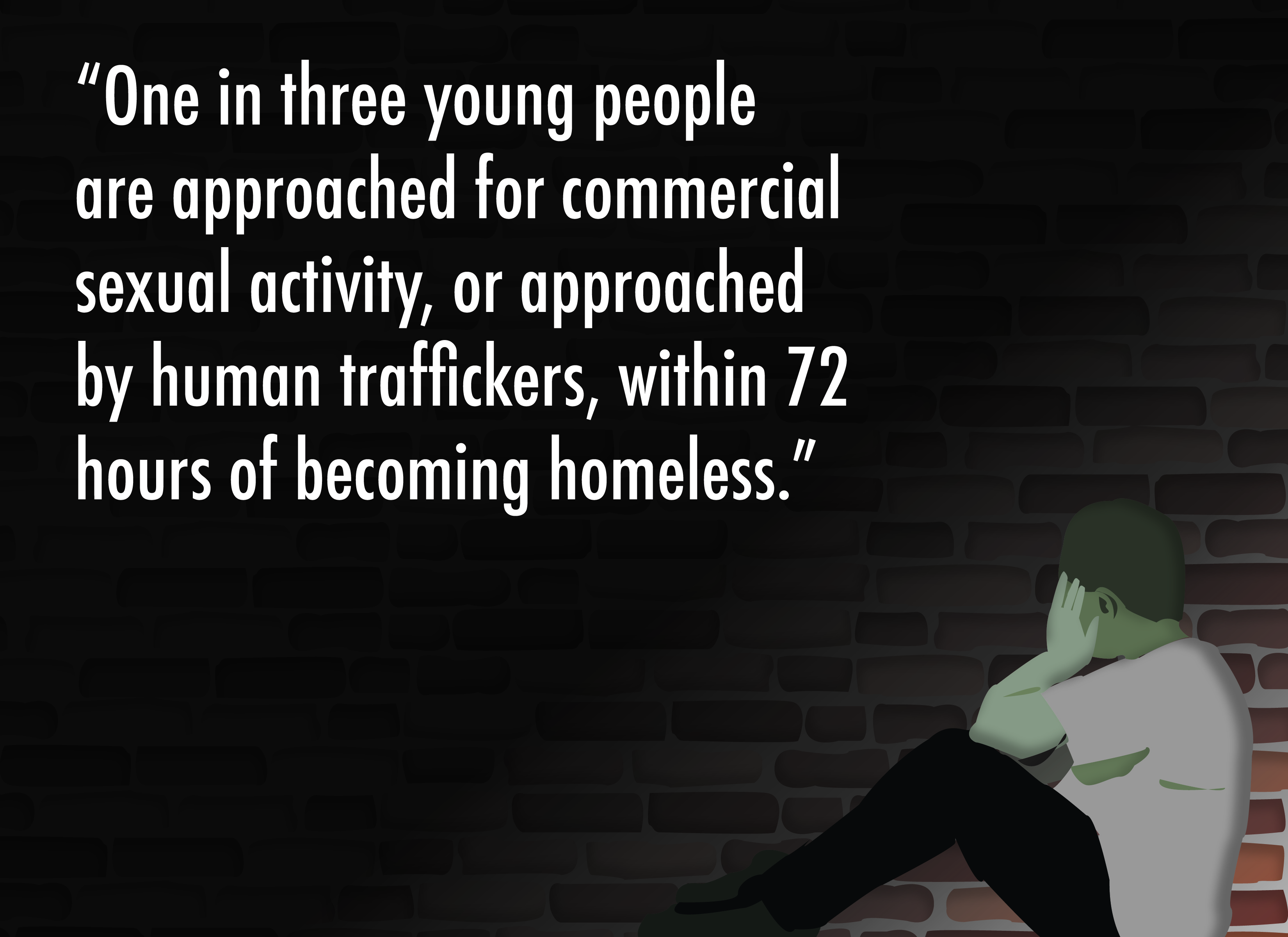 That’s why groups like Teens Against Human Trafficking are vital. The program is in several Iowa high schools, and teens are taught about human trafficking and how to talk to other high school and middle school students about the crime. From October 2016 to June 2017, the program has helped 185 exploited children and teens come forward after listening to presenters.

“We’ve had that happen when those teens have gone into those schools,” Ferjak said. “They’re what I call miracles because you’re there at the right time, with the right person, with the right message. It hits, it clicks and they disclose.”

Patten said affordable housing could help prevent and end the human trafficking of homeless youth. With more options, shelters would be able to more quickly move people out of the shelters into stable housing, then new people could come in and take their place.

“We don’t want people to sit in emergency shelters,” Patten said. “It’s not set up that way. That’s why we’re not getting the movement in the emergency shelter because there’s a lack of places for them to move to. It’s a really hard cycle to end when you don’t have affordable housing options.”

There are a number of resources in the Des Moines area for homeless youth and survivors of human trafficking. YSS has nine emergency beds for homeless youth to sleep in. They also have a drop-in center where young people can shower, do homework and use the internet.

Most Beautiful Bulldog to be named on Relays Sunday

Bulldog for a Day