Riots at Relays unlikely despite past 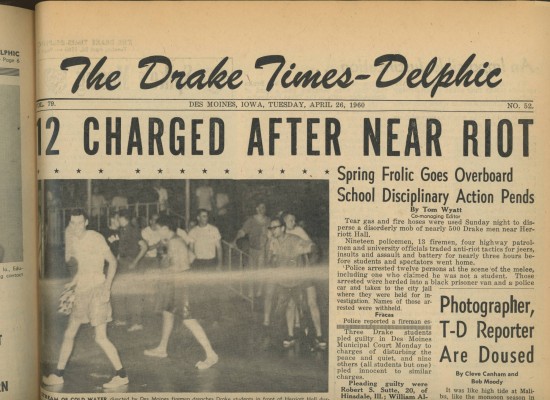 Administrators and students don’t anticipate rioting during the April 23-27 Drake Relays, thanks to the university’s career-minded culture and close-knit community.

Though Iowa State University is situated just 35 miles from Drake, it has faced violence both from students and visitors at its annual Veishea celebration. Similar to the Drake Relays, Veishea marks a time for students, faculty and alumni to celebrate the university’s academics and accomplishments.

The 2014 celebration quickly turned into a drunken, dangerous incident, as Iowa State students overturned cars and uprooted light poles. A light pole fell on a student, leaving him seriously injured.

“I don’t think there’s a large scale of personalities like that that would do something like that here,” Bakari said. “I think we’re a small enough institution that we would recognize people and know people. I would like to believe that students are so invested in protecting their career and recognizing how competitive it is in this market, and that the image they want to maintain of themselves and their own reputation they want to elect, but I also think students do take pride in being a Drake student. I just don’t think we would get anything to that scale.”

Besides the importance of a positive reputation entering the job market, Bakari said Drake’s position on a national and international stage during the Relays deters violence.

With a field that includes London Olympians and World Champions, Bakari said Drake students recognize that the international track spotlight is on Des Moines.

While Veishea is primarily known as a week-long excuse to party for the Iowa State campus, Drake students said the dynamic of the Drake Relays reduces the potential for violence.

“The Relays are more structured they have a more pointed celebration than just a party,” said junior Alex Jones.

Despite the administration’s confidence in Drake students, Bakari said the university boosts the security and police presence during Relays as alumni and world-class athletes descend on campus.

“We work closely with the Des Moines Police Department, the Drake athletic department and our student government to try to allow for a maximum amount of enjoyment for everyone,” said Drake Public Safety Director Scott Law.

Rioting is a part of the Drake Relays’ past, though. According to the April 26, 1960, issue of The Times-Delphic, 12 people — including 11 Drake students — were arrested after police used tear gas and fire hoses to disband a mob of 500 men near Herriott Residence Hall. The clash took 19 police officers, 13 firefighters, four highway patrol officers and Drake administrators three hours to disperse.

As the importance of a positive, professional Internet presence emerged, though, that reckless culture faded from the Drake campus. Bakari said the noticeable increase in security personnel further deters the type behavior that occurred at Iowa State.

“To come here and get violent and start ripping down poles, well, first all, we’re going to have enough staff and security that’s not going to happen,” Bakari said. “It won’t happen. But I also think we’ve got students now who are so much interested in protecting their career and image and reputation. I just don’t see it happening.”

“Between a smaller, private university and a state school, there is kind of a culture difference,” Mathews said. “Not necessarily in the quality of education or anything, just I feel like with scale and the atmosphere, there is a difference.”

Wishing you had a copy of the TD to read this week? Our print edition will be back on Oct. 27, but in the meantime, check out our latest online coverage and other stories you may have missed. -[td]
https://t.co/KcQeKRDtZA
View on Twitter
2
3

[BREAKING NEWS] — The Drake football game against Stetson planned for this Saturday has been cancelled after reaching Tier 1 of Drake’s COVID-19 protocols.

The game will be declared a forfeit.

Buying Tickets for a Chance to Catch a Game