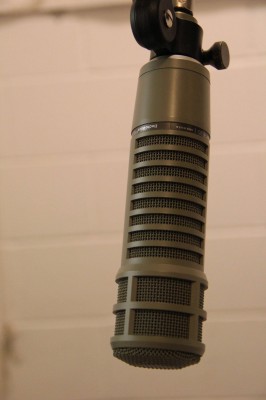 When you ask the average bystander about Drake University, the first thing that comes to mind is the Drake Relays.

What they will not realize is the amount of work that is poured into the event, and Bulldog student-athletes aren’t the only ones dedicating their time and energy to  Relays.

This includes a good portion of the student body. One group in particular has made this event a life-changing one for everyone involved: the Drake Broadcasting System (DBS).

Every year, DBS produces a Relays telecast that airs live on the College Channel during Relays.

About 40 volunteers help with the broadcasting, filming and editing, among other tasks.

This broadcast would not be complete without strong leadership.

“Personally, my life has changed since the moment I accepted the position. It became three times as busy and challenging. It also is testing my skills as an organizer, mentor and broadcaster. So the real impact here is how I respond to this work and excitement,” said Amanda Horvath, executive producer of the telecast. “With every bit that must be considered for this broadcast, it makes me a better broadcaster and overall person. I have formed friendships and skills that I would not have had without this broadcast.”

Horvath isn’t the only one under pressure.

Students break into groups headed  by a line producer who oversees packages created beforehand and aired during the telecast. Packages are self-contained segments complete with action shots, audio and natural sound.

Including videos about competing schools, events like the Pole Vault in the Mall and other topics are at the discretion of DBS, and it’s no easy task.

Students dedicate countless hours of writing, shooting and editing packages and preparing them to air, all while on strict deadlines that transform the basement of Meredith Hall into a mini dormitory.

It is not uncommon to see students in the Digital Palace late  into the night working on their packages.

But the pre-produced content doesn’t begin to describe what the Relays broadcast is all about. It is primarily a live broadcast, and that’s what separates it from other events throughout the country.

“Live broadcasts constantly throw curveballs, and it’s learning how to deal with those that make us truly the top notch journalism students this school produces,” Horvath said. “The pressure and excitement of a long, live broadcast like this is something that not many schools are doing, and it’s truly what makes us better students more prepared for real-world broadcasts.”

“It is a great opportunity to experience working on a live sports broadcast, and there is a great feeling of accomplishment once the coverage is over,” said producer Rachel Collins.

Riots at Relays unlikely despite past