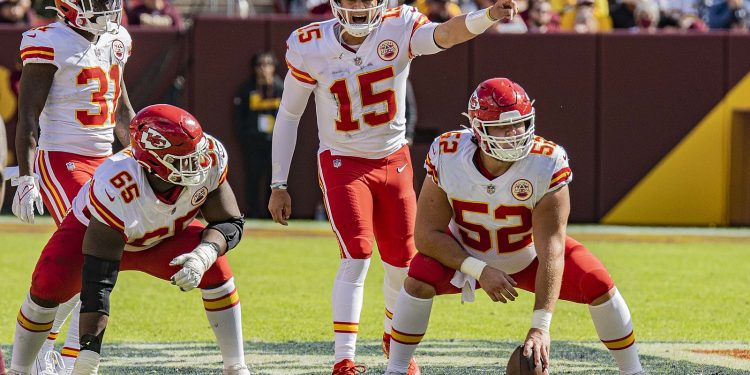 Through 11 weeks of the NFL season, Kansas City Chiefs quarterback Patrick Mahomes is in complete control of the hunt for Most Valuable Player. It has been anything but a straightforward route there, however.

To begin the season, Mahomes had the second-best odds to take home the award, behind Buffalo Bills quarterback Josh Allen. Through two weeks, Allen had slightly extended his lead following the dismantling of the Los Angeles Rams and Tennessee Titans.

The first setback for the two quarterbacks came in the third week. In Week 3, Mahomes and the Chiefs fell to the 0-1-1 Indianapolis Colts in an ugly 20-17 game. Luckily for Mahomes, in the same week, Allen and the Bills were defeated by the Miami Dolphins 21-19. The two losses essentially canceled each other out, and the odds remained the same.

The next big test for the MVP frontrunners was a head-to-head matchup. In Week 6, the Bills and Chiefs, both 4-1, faced off in Kansas City. It was a surprisingly defensive matchup in which neither team cracked 25 points. With a minute left, down 20-17, Josh Allen delivered a strike to Dawson Knox in the end zone to take a 24-20 lead.

The last time Mahomes had the ball in the 4th quarter against the Bills, he engineered one of the all-time great game-saving drives. This time, it was not to be. In the second play of the drive, Mahomes threw an interception to Bills corner, Taron Johnson.

Mahomes finished the game 25/40 for 338 yards, 2 touchdowns, and 2 interceptions, while Allen finished 27/40 for 329 yards, 3 touchdowns and 0 interceptions. Allen’s MVP lead grew while Mahomes tumbled to third.

Jalen Hurts, quarterback for the (at-the-time) 7-0 Philadelphia Eagles had emerged as another true MVP candidate. In the same week as Mahomes’ loss to the Bills, Hurts and the Eagles defeated the 4-1 divisional rival Dallas Cowboys, thanks to a great performance by Hurts. As a result, Hurts overtook Mahomes for 2nd in the MVP race.

However, at this moment in the season, Allen’s hold on the MVP seemed to be insurmountable to both Hurts and Mahomes.

Mahomes responded to the loss by delivering a 423-yard, 3 touchdown performance against the San Francisco 49ers, the NFL’s number 1 defense at the time, breathing life back into his MVP chances.

Meanwhile, Allen and the Bills beat the struggling Green Bay Packers 27-17 despite an extremely sluggish second half. These second-half struggles proved to be a premonition rather than an aberration, as they dropped their next contest 20-17 to the New York Jets, a game in which Allen completed under 55 percent of his passes, under 210 yards, no touchdowns and two interceptions.

The same week, Mahomes threw for 450 yards in a 20-17 win against an inspired Tennessee Titans defense and led a game-tying drive in regulation and a game-sealing drive in overtime. Allen’s lead was shrinking.

Week 10 proved to be a turning point in the MVP race. The Chiefs took care of business against the Jaguars, with Mahomes throwing for 331 yards and 4 touchdowns in a 27-17 win. Meanwhile, the Bills and the Eagles both fell, with Josh Allen throwing a game-sealing interception in a thriller with the Minnesota Vikings and Jalen Hurts delivering his worst performance of the season against the Washington Commanders.

Mahomes vaulted into the lead for MVP and compounded it the following week with a great performance and game-winning drive against division rival Los Angeles Chargers.

Through 11 weeks, Patrick Mahomes leads the NFL in passing yards and touchdowns by a wide margin and holds the #1 seed in the AFC.

He currently has -155 odds to win the MVP, while Jalen Hurts and Dolphins QB Tua Tagovailoa are tied for second at +575. Meanwhile, Allen has fallen to a distant fourth, with +675 odds of securing the award.