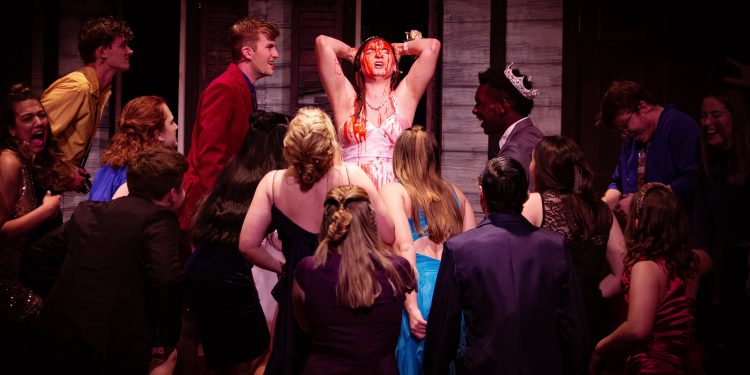 The Drake University Theatre Arts Department production of “Carrie” the musical ran Oct. 27-30, with a sold-out run in the Coleman Blackbox Theater.

“Carrie” ran on Broadway in 1988 for a total of three days and five performances. The show was considered a major financial failure, and has gained notoriety over the years as one of Broadway’s biggest flops. Highlights from the 1988 production include a dance number about slaughtering pigs, costumes reminiscent of “Grease” and a giant stark-white staircase descending from the sky (which nearly decapitated the actress playing Margaret White).

The show was rewritten and revived off-broadway in 2012. This reworking led to the script we now see performed by Drake Theater.

It has been stripped of most of the original 1980’s campiness and is now a more simplistic coming-of-age story gone wrong as Carrie White struggles with bullying, religious abuse at the hands of her mother and her newfound telekinetic abilities.

Laura Breyen, a sophomore studying musical theater and psychology, plays Carrie White. While Breyen is a strong vocalist, her acting is very what sold audience members.

“Carrie is harshly bullied for a lot of the show, and especially at the beginning of the rehearsal process, it would be hard for me to bring myself out of that dark place,” Breyen said.

It did eventually become easier for Breyen to pull herself in and out of that darkness, and said the support and compassion of the cast made those difficult scenes easier.

One difficult scene was the destruction, the moment after Carrie receives a shower of pig’s blood while being crowned prom queen. Carrie then unleashes her telekinetic powers and, in a fit of rage, kills everyone at prom. Breyen said that is her favorite part of the show and called it a once-in-a-lifetime experience.

“There are so many moving parts happening all at once and it really showcases the skill of all the actors and tech department,” Breyen said.

Junior Joe Barnard worked as the set designer. The “Carrie” set is an old church building with stained glass windows that depict the story of Carrie and Margaret White using famous religious paintings. Barnard appreciates that the production never makes a point to show them off.

“They simply exist as a backdrop to the action and are there for the audience to discover,” Barnard said.

Religious imagery is heavily used in the set of this show. Barnard says it helps to explain the setting but to also make the audience feel unsettled. A room where Margaret sends Carrie to pray is littered with dozens of crosses.

“The exaggerated nature helps the audience see just how extreme Margaret’s faith is and to allude to her ultimate fate,” Barnard said.

Barnard hopes the audience comes away with a deeper understanding of a few different things.

“First, just how bad high school bullying can be and the damage it can do to a victim. Second, how religious extremism can affect people, and ultimately how that gets passed down as trauma between generations,” Barnard said.

The phrase “What does it cost to be kind?” is repeated throughout the show. That is the message that Laura Breyen hopes the audience takes away from this story.

​Coming next to the Drake stage is “Silent Sky,” which runs Nov. 17-20 in the Performing Arts Hall.