Car Accident Sends One Writer on Ride of Shame 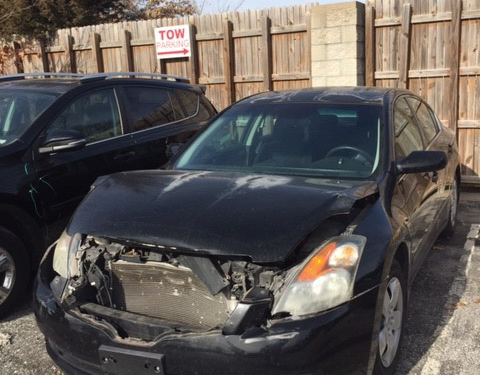 Over winter break, I was in a car accident. Not to worry, though— everyone made it out alive, save for my car, which got about as busted up as a prop car in a Michael Bay movie. I want to make it clear from the outset that this article is anything but a pity party. After all, as The Fortunes once said, “You’ve got your troubles, I’ve got mine.”

Thing is, we humans don’t really know how we’re going to react to these kinds of things until it hits us square in the face like a gong mallet, a feeling akin to being completely in the dark prior to a Great Clips haircut. Tragedy is a peculiar subject, because in reality, your life is a coin flip away from total devastation, an Archduke Franz Ferdinand assassination away from downright catastrophe.

How about that for a haunting thought to accompany your breakfast.

Still, the more I’ve thought about it, being handed this news puts my dusty duel into perspective— that is, my incessant complaints about my dorm room being snowed in with dust.

When I collided with the mom-suburban, I sat there for a moment in utter shock, immobile, as if I had just seen my high school chemistry teacher in Walmart. The authorities could’ve frozen me in carbonite in that stance and there’s no doubt I would’ve been the most-trafficked exhibit in the Smithsonian next month: “Here lies Colin Frier, world class moron.”

From there, I glumly veered over to the adjacent gas station and got out of the bashed-in car, surveying the damage. It was bad— Hulk-smash bad. It looked as if I had just sent Marsellus Wallace from Pulp Fiction flying over my hood. My precious automobile was leaking mysterious oil that looked strikingly similar to Rudy Guliani’s hair dye. It was a ghastly sight, and to my left, the recipient of my sheer ineptitude, a nurse, certainly seemed to agree.

The woman phoned the police, and soon thereafter, my mind began a-whirling. See, I had never, in my nineteen years of life, ever had a confrontation with the police. Nevertheless, my initial thought was, “Thank God I don’t have weed in the trunk.” Why that was the first thing to cross my mind, I haven’t a clue.

While we were waiting for the cop to show up, I paced back and forth outside like a defense attorney on a serial killer case, knowing full well that my chances at getting out of this bind scot-free were minimal at best. I must admit I felt like a maniacal criminal, concocting an alibi and assembling a lineup of fallmen. I had a celestial audience, however: getting into this wreck was most likely divine punishment for stealing that gumdrop off the family gingerbread house on Christmas Eve. Wherever I turned, dead ends. I was in a hall of mirrors. In my mind, I had already been sentenced to Alcatraz.

Then again, I did my best to reassure myself. As The Animals once said, “Don’t let me be misunderstood:” I’m not even remotely fast while driving, nor am I reckless. In a road race, one-hundred-thirty-seven-year-old Mitch McConnell would cross the finish line before me. Still, whichever angle I took on this incident, I found myself time and time again donning the dunce cone. Being in a car wreck is anything but a Medal of Honor; it’s more like a Razzie Award. And with my car’s hood smashed in, it looked as if the lady I ran into got the apple in the deal, while I got the cyanide: her car received no more than a gentle grazing, like the brush of Bob Ross; leastways, that’s how it appeared.

After a half hour give or take, the cop pulled up, my dad arrived, and all the while I was trying to convince myself that the damage was “just a flesh wound,” in the words of Monty Python.

Though as it turned out, it was anything but.

Getting a look at the total estimate made me wish for Calvin’s fifty-cent insurance in Calvin and Hobbes, because seriously, it was so hefty a price that the Geico gecko showed up to my house the next day and began to curse me out in Spanish. What’s worse, I’ve blown through two cars in a span of two years: one to an accident, one to an irreparable malfunction. At this point, I’m starting to think I’d be better off going the cart-and-horse route. Forget cars— I need something like the War Rig in Mad Max: Fury Road. Anything that isn’t built like a straw house. And, shopping for a new car is entirely out of the question. Been there, done that. Going car shopping is like voir dire in hell, forced to choose between Beezlebub or Belial.

Finally, in the denouement of this whole debacle, my dad and I drove the Nissan War Veteran to an auto repair shop following the cop’s sentencing of life imprisonment. My car was billowing smoke the entire forty minutes, unwilling to go faster than ten miles an hour, so we both flicked on the hazards just to give the rubberneckers surrounding us a heads up. The scene looked like a funeral procession.

Forget that. It was a funeral procession.

I must say, I was hoping to come out of this experience completely transformed like Bob Dylan after his infamous motorcycle incident or Paul McCartney after his supposed car crash, but alas, I’m the same old Colin Frier.

In the end, though, at least we can be thankful I wasn’t driving a Prius.