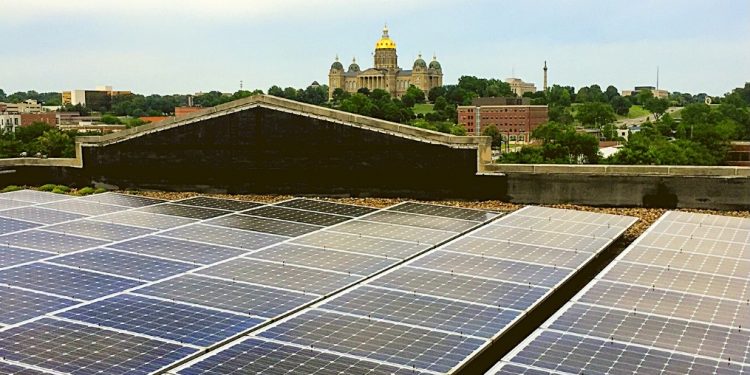 Solar Panel on top of the MODUS building in the East Village at 108 E 3rd St, Photo Courtesy of Jordan Oster
0
SHARES
378
VIEWS
Share on FacebookShare on Twitter

This month, the Des Moines City Council is slated to consider the adoption of a 100 percent clean energy standard for the City of Des Moines. The proposed resolution calls for the city to pursue a community-wide 24/7 carbon-free electricity goal by 2030.

This move would build upon the mayor’s existing climate commitment to reduce greenhouse gas emissions 28 percent by 2025 and the 2019 Energy and Water Benchmarking Ordinance, which requires large buildings in the city to track their utility usage.

“By reaching 24/7 carbon-free electricity generation in the next decade, Des Moines, its residents, and those in the region can benefit from cleaner air and water, improved health benefits, and increased economic prosperity,” said Jordan Oster, 100 Percent Iowa Team Lead and Energy Outreach and Advocacy Coordinator with the Iowa Environmental Council. “This isn’t just about battling climate change, which is critical and urgent, but also about making Des Moines and Central Iowa a cleaner, healthier, and more desirable place to live and work.”

Leading up to the vote on the resolution, city council members and members of the public have been invited to attend a virtual solar and energy tour on Dec. 10 where they will hear presentations on clean energy projects from key employers in Des Moines. The tour, hosted jointly by the Iowa Environmental Council, 1000 Friends of Iowa and the Des Moines Citizen’s Taskforce on Sustainability, intends to highlight how these companies are saving money and energy with solar and energy efficiency projects.

To date, more than 40 local businesses and organizations have signed on in support of the resolution, as well as over 600 residents. Letters of support were delivered to the mayor and city council members ahead of the work session.

“We support this initiative because the city is long overdue in taking aggressive action on climate. There are over 160 cities across the country who have already committed to 100% renewable electricity community-wide, and we want Des Moines to be next on that list,” said Tanner Faaborg, Board President of Urban Ambassadors, a Des Moines based nonprofit that empowers individuals to be more sustainable in their own lives.

Local environmental groups have been organizing supporters around this issue since earlier this fall.

“It’s vital for council members to hear from their constituents on this matter,” said Kristen Weaverling, Energy Communications Coordinator with 100 Percent Iowa, a grassroots project that empowers Iowans to advocate for 100 percent clean energy generation. “Because officials are eager to hear from younger generations, the student population can be really impactful in shaping the outcome of this initiative.”

Solar Panel on top of the MODUS building in the East Village at 108 E 3rd St, Photo Courtesy of Jordan Oster