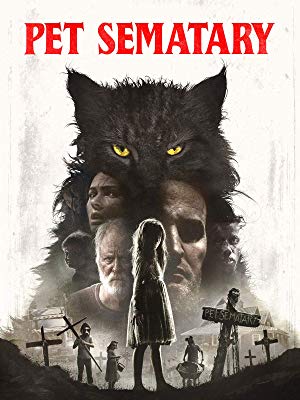 Normally, I’d start my review with a basic outline of what happens before going into my thoughts and feelings. Except, given that the advertising wasn’t exactly shy about telling you what the plot is for both this movie and the original, I don’t think that’s necessary. Instead, I’m just going to launch right into the good and bad qualities of this movie.

While the original film was about 90% the novel, probably owing to Stephen King himself writing the screenplay, this remake plays more fast and loose with the source material. Most of the changes I would call superficial, such as how in this version it’s Ellie (Laurence Jeté) who gets killed and not Gage (Hugo and Lucas Lavoie). The reason why I call that superficial is because no matter who gets killed, the film still explores the story’s themes of how it’s a father’s duty to protect his child or how different people react to grief. However, there is one major, non-superficial change that totally ruins this new version for me.

The main problem with this remake is that it lacks the original’s heart. The hardest part to watch in the original film, for me at least, wasn’t anything to do with the supernatural, but the all too mundane horror of the story. Like losing a beloved family member when their so young, a father slowly being driven insane by grief, or Rachel’s (Amy Seimetz) story about her sister Zelda (Alyssa Brooke Levine, an actual girl this time). Which this new version glosses over in favor of more zombie action.

Besides that, my only other big problem with this movie is that Jud (John Lithgow) comes across as way too creepy this time around. As opposed to the original film and novel, where he was very much this warm and friendly old man that you’d love to live next door to. Except for the part where he’s the one who shows Louis the ancient burial ground, but that wasn’t entirely his fault. Because the burial ground does have the power to influence people’s minds, something that’s more heavily implied here than in the original film.

Now, there are in fact some improvements to the original film. For one, Jason Clarke is a much better actor than Dale Midkiff. The scenes with Victor Pascow (Obssa Ahmed) are more suitable eerie and solemn, unlike in the original where the intended impact was ruined by cheesy special effects and the actor always having this slight smile, even when he should be serious. Though those few positive elements aren’t enough to prevent this remake from ultimately being pointless. This new version adds nothing to the story. The only thing that would have made this remake more pointless is if it was a shot-for-shot remake.

Something that I find interesting about the decision to remake Pet Semetary and It,  which I did actually enjoy, is that the filmmakers have to deal with the high expectations of remaking something so beloved. Why would anyone want to deal with that pressure? Instead, they should just remake all the Stephen King film adaptions that were never good to begin with. So, with that in mind, I have two words for you. Maximum Overdrive.

The Process Behind Painted Street