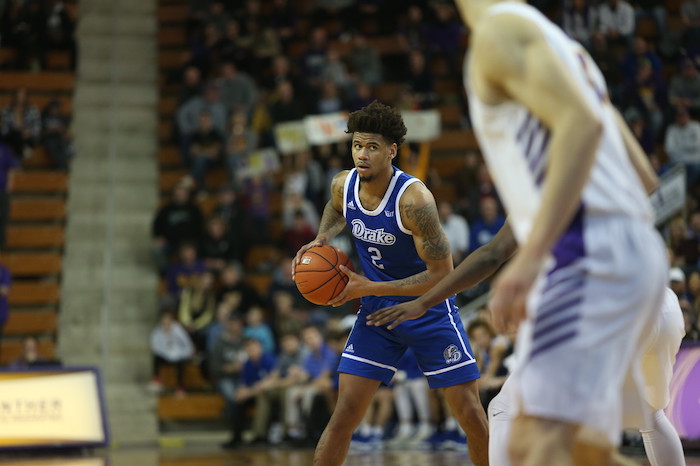 Des Moines got cold over the winter break; at times, so did the Bulldogs.

But when they were hot, they were hot. Drake went 12-4 in a stretch that was kicked off by a convincing home win over Boise State. The Bulldogs used their momentum to roll over North Dakota State and Milwaukee on a two game road show.

Their five game winning streak was snapped against Iowa State in the Hy-Vee Classic. Drake brushed the 68-77 heartbreaker aside and won the first two rounds of the Las Vegas Classic in Des Moines. After defeating Southern Illinois and Rider, the team flew to Vegas for the remainder of the tournament.

The Bulldogs squeaked out of Sin City with a 66-63 win against New Mexico State and a double overtime win against San Diego. Show up, win out, go home.

Ten days removed from their impressive showing in Nevada, the Bulldogs were dealt their most disheartening blow. That blow came during a home match against Evansville. Starting senior Point Guard Nick Norton went down late in the first half and left the game without returning. Evansville utilized the energy shift and downed Drake in double overtime.

After the game, Norton was diagnosed with a torn ACL—his third time receiving such a diagnosis. He will not return for the remainder of his senior season. Norton suffered the injury last while starting for UAB. He was the first of a wave of Drake transfers that preceded the 2018-2019 campaign.

Eligible for play immediately upon transferring, Norton has averaged 14.5 points on the game during Drake’s historic 16-5 season. He was named the MVP of that Las Vegas title run. Perhaps his most memorable highlight of 2018 came when he recorded a triple-double effort in a win against North Dakota State back on Dec. 1. With 17 assists, he shattered the school record previously held by Jeff Hill.

The loss of Norton couldn’t have happened at a more inopportune time for Drake. The Bulldogs were slated to host Loyola of Chicago the following week. It was to be the first time the Ramblers would enter the Knapp Center since their Final Four run last March.

“Everyone these last couple days of practice has stepped up and tried to fulfill those roles that he (Norton) had,” first-year guard Garrett Sturtz said. “I think everyone realizes that this is conference play now, Nick Nortons out, that everyone has to step up and play even better now.”

Despite the resilience, it was clear the Bulldogs had been rattled by the loss of their point guard. The Ramblers handled Drake at home. Loyola walked tall out of the Knapp Center with an 11-point victory.

The following week, Drake dropped another one in Cedar Falls against UNI. In an address to the team, head coach Darian Devries attempted to right the ship.

“Nick was extremely valuable part of this team, and we’re gonna miss him dearly on the floor,” DeVries said. “He’s going to continue to be apart of this team, but as we move forward there are no excuses, for us.”

The speech paid off. The Bulldogs went off on a tear, erupting into a four-game winning streak that is alive and well. They handled Bradley and Missouri State. They even got their poetic justice against Evansville with a double-digit victory.

Drake will look to continue their streak of vengeance and victory against Loyola in February. Until then, they host Illinois State before traveling to Indiana State, giving them their opportunity to extend their ongoing winning streak to six.

With the remainder of their schedule, the Bulldogs will look to honor the leader they lost in Norton by continuing to dominate opponents.

“Nick was the first guy to look at a roster of three, with a brand new head coach, and say ‘okay, I want to be apart of this. I believe in this’,” Devries said. “We’re not about excuses. There’s still a lot of competitive guys in here and a lot of winning guys in our locker room and we’re ready to go.”