Most Drake students coming back from the summer were not disappointed to return to the the newly renovated Cowles Library. Sophomore Sarah Ball said she liked what they did to the library. 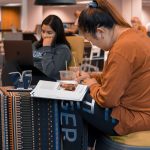 “I didn’t go to the library a lot last year,” Ball said. “But I’m looking for new studying spots this year and I’m kind of drawn to the new and very nice furniture.”

Ball stated that with the new furniture, there are now a lot more seating options at the library, which has eased her process of finding a studying spot every night.

The beginning stages of renovation started when library staff moved some shelving around last fall. They originally only wanted to make the service desk more accessible by moving it out of the left corner of the first floor, but they soon realized they could be doing a lot more.

“The library [did] a master facility plan for the entire library a couple of years ago, but we weren’t ready and didn’t have all the money to make all the changes to the whole building,” said  Leslie Noble, head of information services.. “We wanted to get things going and make a significant change somehow, so we thought we would start with this main floor, since it could be a busier floor just for students, and we also have our service desk here.”

Before the renovations, Cowles Library used to have three service desks located at different places on the first floor, Noble said.

“We really wanted there to be one place where students, faculty and staff come in, they see this desk and they know that’s where they are supposed to go for help,” Noble said. “The whole goal is to make the place more accessible.”

The first floor also got new carpet, a new coat of paint and some modern-looking furniture. Noble said that they tried to create a variety of studying spaces for students.

“We had some demos last fall, near finals week. We had some furniture up to do testing and some of the feedback we got was students really like the high-top tables to sit at,” Noble saidt. “The green booth is called the ‘brody,’ which was really popular for individual studying space, so students who work by themselves could do that.”

“It was hard to find a place to be by yourself in the library before,” Van Der Leeuw said. “Now, there are those green cubicle things that I really like, and the white walls help too.”

Most books are now moved off the first floor. Cowles’ main collection is now on the two other floors. First floor is now for magazines, leisure, some of the more popular fiction and non-fiction books as well as reference materials.

“Those materials typically don’t get checked out, we just refer people to those when they ask for help at the service desk,” Noble said. “We did decide to keep them on the first floor because they are used a lot.”

Those items on the renovated floor are now kept on shorter shelves, so they don’t block people’s view across the whole floor.

Noble mentioned that they are still in the process of finishing up with the renovations: computers haven’t been installed as well as a couple pieces of furniture. The south doors, by the after-hours area, have also been opened for Drake students, faculty and staff.

“Typically, those doors would be locked, but now if you are a Drake Student, faculty or staff, you can use your ID to scan in and get in or out that door anytime you want,” Noble said.

Noble appreciates the new modern and welcoming look the library has now.

“We really want people to be here and use our space,” Noble said. “And if this helps get them here, we will do [renovations]happily.”

According to Noble, the next goal is to make some more changes to the rest of the library once they get more funding.