Phantom Paint: the ghosts of Painted Streets past 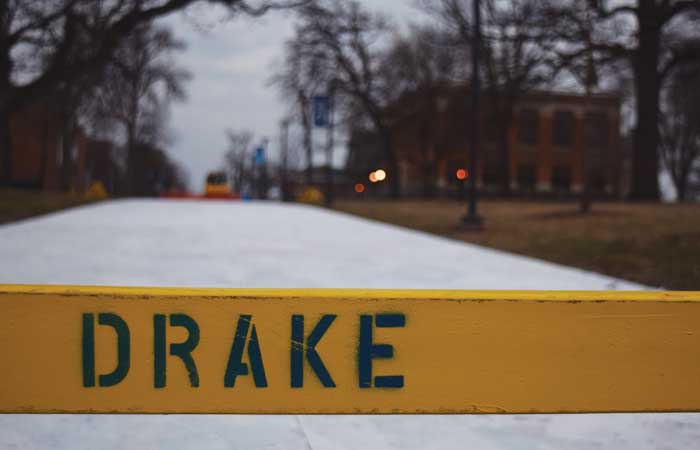 When prospective students receive informational brochures from Drake University, one of the most promoted aspects of campus is the lively and colorful Painted Street, which dawns on the sidewalk just north of Cowles Library. However, for students visiting campus last week, the beloved Drake landmark seemed to have vanished from view.

On April 12, a handful of Student Activities Board (SAB) students volunteered part of their afternoon in order to cover Painted Street in white in preparation for the annual street painting that occurred on Friday.

“White-washing” is a less-publicized Drake tradition but is vital to the overall success of Relays week. Each year, the street becomes a blank canvas, giving 56 student organizations the chance to show off their group for a calendar year by painting a sidewalk square that corresponds with the selected Relays theme.

Last year’s theme was “Like Never Before,” and some SAB members like Joanna Drake and Relays committee co-chair Meghan Mulligan were sad to see the squares of 2017 disappear.

“It was really awesome, I was just like ‘No! We should probably just keep it!’” she said.

Apart from the slight sentimental hardship, Drake said that it was a physical challenge to cover up the old paint.

“It was hard, actually, because you would try to paint over it and get it done, but it kept chipping, so it wouldn’t let you paint over (the street),” she said with a laugh.

Although it was hard to let go of the past designs, Drake sees an importance behind starting fresh each year.

“People that are in the club change every year, so it shows the growth of the club,” Drake said. “Maybe they have new members, so they can feel included.”

The 2018 Relays theme is “Life in the Fast Lane,” and Mulligan was the mastermind behind it. She could not wait to see how organizations incorporated the theme into their designs, especially because it is not the easiest theme for every organization to utilize.

When Drake hears the phrase “Life in the Fast Lane,” she thinks of either the Eagles’ 1976 song or cars from the “Fast and Furious” series, with flames emblazoned on the sides.

As far as being relevant to the campus, the theme could be a comment on the busy culture that Drake students tend to partake in.

“Everyone at Drake is so busy – their lives are on 10,000 speed-wise … and even though we have a lot on our plates, we still have time for fun,” Drake said.

White-washing and Painted Street are only the beginning of a full week of Relays events put on by SAB and Drake Athletics.