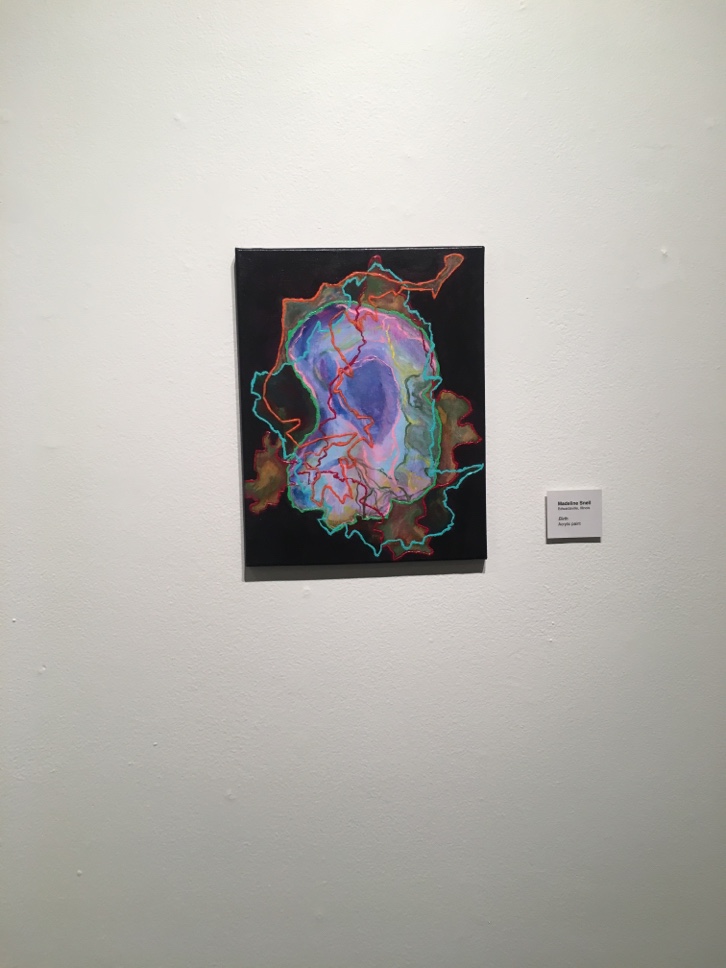 Each year, the Anderson Gallery hosts the “Juried Student Exhibition,” an art competition compromised solely of student artwork. An outside critic, or juror, analyzes all the pieces submitted and gives out awards for first, second and third place.

Sixteen students submitted, which totaled 77 pieces. The artwork will be on display in the gallery until Sunday, March 26.

“The works in the exhibition are evidence of the discipline, practice and devotion that went into realizing them,” said the juror,  Alison Ferris, in a statement featured in a booklet given out in the Anderson Gallery.

Junior painting and psychology double major, Madeline Snell, sold one of her pieces to a buyer who asked to remain anonymous. The buyer saw it on display in the Anderson Gallery opening day.

“I just walked into the opening of the exhibit and the director came up to me and told me my sculpture sold. The first thing I did was call my mom,” Snell said. “I have never sold a piece before. I mean, I’ve made painting for friends, but nothing like this. To have a stranger want to buy (my art) is pretty great.”

Snell named the sculpture “Freedom Ring,” because of the importance of free speech. Snell claimed it was her most acclaimed sculpture because it had received many compliments prior to it entering the show.

Her other piece of artwork displayed in the exhibit is a painting entitled “Birth.” The symbolism in the piece pertains to Snell’s past.

“Since I am in psychology and painting, I was looking at brain scans,” Snell said. “I thought, ‘I’ll just paint a brain scan,’ but once I got back to Drake, my professor was saying that she always sees brain imagery in art and that it is kind of overrated.”

To distinguish her brain scan painting, Snell flipped the brain scan vertically and, since the brain was painted on the canvas horizontally, it gave the art a whole new form. Then, she outlined countries her family has traveled to in bright colors all over the canvas, adding a personal touch.

Snell had submitted artwork to the gallery the past two years, but was denied both times.

“As an art student, it’s a question of ‘Why wouldn’t you submit?’” Snell said. “It’s a great opportunity that really prepares you for the real world.”

Another art major, who is working towards a BFA in painting, Katie Jensen, won second place for her painting “Atropa, belladonna.”

“I was surprised to have my painting place 2nd place in the show. It is pretty exciting to know that other people are interested or inspired by my artwork,” Jensen said. “Being recognized for my art makes me feel like I am doing what I should be doing.”

Jensen was also in the involved in this competition last year. She plans on finding a art related job after she graduates.

“I have been creating artwork since I have been able to hold a crayon, and I plan on making art until I die,” Jensen said.

Many of the students who submitted artwork are art majors, but junior artist Lindsay Fiegle is a public relations major who recently added graphic design minor and she submitted two paintings from her drawing one class.

Last semester was the first time Fiegle had ever painted, since drawing one is a prerequisite for her minor. Both of the pieces she submitted were accepted to be a part of the show.

“I am enjoying this new form of art,” Fiegle said. “I’ve liked what I am learning in these studio classes.”

Her two pieces, “Lineage” created with oil pastels and “Soundtrack,” created in conte crayon, were both works from class that her professor encouraged her to submit.

“‘Lineage’ was my final project (for Drawing one),” Fiegle said. “Mine depicts the light actually coming through Sheslow’s windows.”

The windows are meaningful to her because of her involvement in the Drake Choir.

“I spend three afternoons a week watching the light fade in,” Fiegle said. “Plus, our director talks a lot about standing on the shoulders that came before us. That’s where (the name) ‘Lineage’ came from.”

Her other drawing, “Soundtrack,” was an assignment done for class on abstraction. The students were to find a collage of images and piece them together in a unique way, Fiegle said.

“The piece is dreamlike, in that it is a collage of a woman’s face, lights and a building that is coming up from behind her face to give it a stark contrast,” Fiegle said.

While art tends to be personal to those creating it, often it can be seen in varied perspectives depending on how the beholder approaches it.

“It can be hard to know the artist’s back story,” Fiegle said. “Basically, what you have is what’s on the wall. But I don’t necessarily think that means there’s a lack of understanding. I’m a big believer that once you give your art to the world, you don’t get to say what it should mean to everyone.”

Snell holds a similar belief. Many people had told her what they thought her sculpture resembled: some thought it was a bell, a spider web or a flower.

The Anderson Gallery is free and open to the public from 12-4 p.m. Tuesday through Sunday and is located on the first floor of the Fine Arts Center.

“Student work is so incredible, even as we are learning and developing,” Fiegle said. “There are so many emotions and thoughts and talents on display for everyone, and I encourage other students to go see what they can get out of the artwork.”