“What do the Relays mean to you?” That question pervades the Drake University campus this time of year, typically paired with a syrupy-sweet declaration of Bulldog pride and lifelong memories. After responding to that question in the above, cliché manner many a time, I’m ready to reveal what the Relays really mean to me.

While I appreciate Drake pride and have made lifelong memories at the Relays (yeah, some students actually attend them), America’s Athletic Classic represents a panic-laden time of year for me — and I love it.

After three Times-Delphic Relays Editions, I’ve learned to embrace the mayhem. And while my Drake Relays “excitement” included Chandler Bing-worthy dancing in Meredith Hall — and that entire row of Oreos I inevitably inhaled while editing — it marked a productive time.

Amid all the awkward dancing, commotion and quote-board-worthy chatter, we created an amazing paper.

After three years of Relays Edition mayhem, I admit the themes, fonts and stories blur in my mind. In that haze, though, I had an epiphany: I’ve been working for the wrong “moment” all along.

When then-19-year-old me finally held the 2012 Relays Edition, I awaited a wave of pride and relief. The oily, black ink embedded in the terrain of my palm would magically validate all my work, right?

But I didn’t experience that. While I felt proud of the work we did, the 56 pages of paper couldn’t capture the sleepless nights, the semicolon-induced fits or the blackmail-worthy invention of the punctuation dance (If you ever hear, “Do the bracket dance,” at a club, thank me). The moment felt, well, blah.

“Next year,” I thought, “I’ll feel different. I know what to expect, and I can’t wait to hold that paper in my hand.”

In 2014, though, I had another epiphany: My Relays Edition experience isn’t defined by a pile of paper or even a single moment. It’s a hodgepodge amalgamation of people, learning, writing (and punctuation dancing) en route to a key, defining idea. It’s an idea that transcends the Blue Oval, the month of April and eventually, my Drake career: Journalism isn’t glamorous, but it’s rewarding. 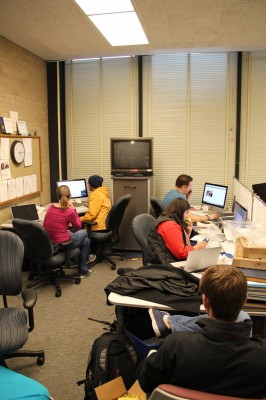 That epiphany felt particularly clear from my vantage point underneath the TD photo desk at approximately 3 a.m. on April 19, 2013 (Hey, I needed a brief break from editing). Before I curled up on the ever-cozy Meredith carpet, I refreshed my browser one final time.

At that moment, the media announced Tamerlan Tsarnaev’s death after a grueling manhunt for the Boston Marathon bombing suspect and his younger brother, 19-year-old Dzhokhar, who remained on the run.

Knowing journalists on the East Coast were working well into the night to protect the area motivated me to keep editing. The memory of lounging and editing beneath that  desk at 3 a.m. while the marathon drama unfolded will forever remind me to work diligently.

I had another epiphany during the 2013 Edition. “What a great potential portfolio clip,” I thought when I began reporting an eight-part profile series about young professionals in Des Moines. As I started meeting the featured professionals and learning about their lives and experiences, however, my motivation shifted.

I became more concerned with sharing their stories than sliding the printed clip into a glossy document protector. Though the piece did wind up in a leather-bound portfolio, it helped me realize I didn’t enter the media world to have a kick-ass resume. I entered it to tell stories.

I’m no longer waiting for the “defining” moment of my Relays Edition experience, or of my Drake experience. Rather, I’m compiling moments every day.

And maybe this year, I’ll feel that wave of pride and relief when I hold the 2014 Relays Edition in my hand. But if I don’t, that’s OK, too.

Soule is a junior news-Internet and writing double major and can be reached at tdeditorinchief@gmail.com