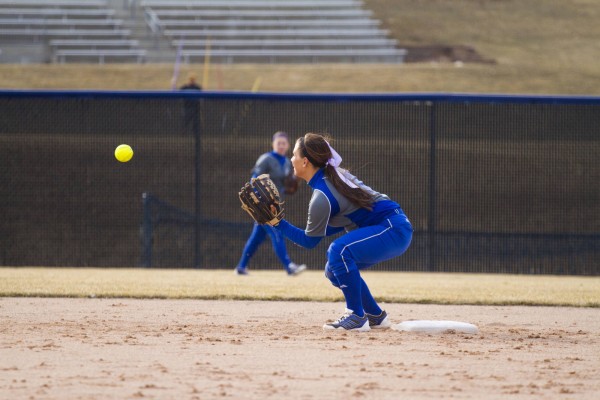 The Drake softball team traveled to Loyola this weekend to play a three-game series. They played one  game on Saturday and a double-header Sunday.

In game one on Saturday, the Bulldogs lost 4-3.

Senior Jordan Gronewold started Saturday’s game for the Bulldogs and struggled to find her stride.

The Bulldogs looked to junior Rebekah Schmidt to help dig them out of a hole, and she did just that.

Schmidt only allowed one walk, had one strikeout and held the Rambler’s hitless.

Loyola quickly came out on the attack and took a 4-0 lead by the end of the third inning off two Bulldog errors.

The first error was by junior Hayley Nybo, who committed the miscue with two outs. An RBI single followed.

The Ramblers scored the remaining three runs in the third inning off of two runs and Drake’s other error.

Kaitlyn Finnernan stepped up and knocked her second-career home run in the fifth inning, which changed the score to 4-1.

The Bulldogs rode this momentum into the sixth inning, where they were able to score two more runs off one hit and the Ramblers committed an error.

The Bulldogs attempted to rally back in the final inning, but it was quickly cut short as senior Courtney Wood hit a line drive straight to shortstop.

In the doubleheader on Sunday, the Bulldogs played a strong first game against the Ramblers.

The Ramblers came out strong again and scored a run in the first inning off a double by Lauren Moore.

Drake responded in the top of the second inning.

Senior Courtney Wood got on base with a single and was able to make it home off a hit by  Finnernan, bringing the game to a 1-1 tie.

Drake continued to strike the Ramblers once again in the third inning.

Freshman Megan Sowa and junior Laura Brewer both had RBI singles and helped the Bulldogs take the lead, 3-1.

The Ramblers took back the lead in bottom of the third, but it didn’t last.

Senior Amy Pierce hit a three-run homer in the sixth inning to lead the Bulldogs to victory.

In the following game, sophomore Mariah McKinnon started for the Bulldogs and pitched two-and-a-third innings.

McKinnon allowed four hits and two runs before Schmidt relieved her in the third inning.

The Bulldogs came out hot, scoring a run early, but it wasn’t enough to match Loyola.

In the third inning, the Ramblers scored nine runs off seven hits, including a grand slam by Olivia Bell.

While the Bulldogs were able to score two more runs, it wasn’t enough to stop the Ramblers and they lost 13-3.

The Bulldogs host Missouri State this weekend for a three-game series.

Students save if they shop smart

Assassination Nation; poor remake of movie favorites no one asked for