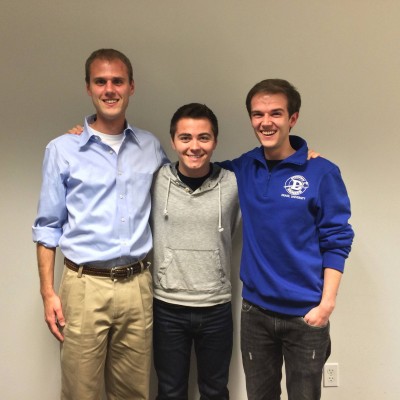 Times-Delphic: As newly elected student body president, what are the first steps you will take to improve Drake University?

Joey Gale: I have two initial steps that Josh (Duden, vice president of student life) and I are really focusing on. The first step will be getting our new senators transitioned. We obviously have a pretty young Senate this year, a majority of them being first-years with only two returners, those being Kevin Maisto and Olivia O’Hea, so a relatively new group of students. We’re going to make it our priority to get them up to speed as quickly as possible so we can have a successful first meeting on May 8 and be ready for the summer and prepare projects so that we can hit the ground running and be ready come August and September. The second step is to get the Senate 60 up and rolling. It was one of the things I campaigned on and something I’m pretty passionate about and believe will make a pretty big impact at Drake. What I want to do with that is get input, get stories, get concerns, get goals and reach out to students these last couple weeks before the semester ends. I want to gather information and then put that into a meaningful plan, which we’ll call the Senate 60, and then throughout the summer we’ll get those ideas rolling so by the time we get back to Drake, we already know what we’re doing so that there’s no wasted time getting up to speed.

TD: What do you believe is the most important issue Drake faces and that you plan to address immediately?

JG: One of the things from my “5-star” plan was addressing communication at Drake. There are a lot of avenues, a lot of channels and especially a lot of noise as to what’s happening at Drake. We don’t necessarily have one designated channel to gather information or find information. You know you can go into Olmsted Center and see table tents, see posters, and that’s easily one way to do it, but I think we need to streamline that process and work on a Drake app, work on getting that campus calendar kind of condensed, and work on communication as a whole. So those will be some of the first things I address.

TD: What are your long-term goals for your term of presidency?

JG: I have set goals for myself in a sense that I will want to make this a different Senate. Many years have been run on something that I call precedent. You know, it’s the way it’s been done before, so that’s the way we’re going to do it. And I don’t necessarily see that as helpful to the students. If there’s a process we use and it’s broken but we still use it, that shouldn’t be the case anymore. So one of my long-term goals is to look at past precedents that we’ve set and see if they’re helpful or harmful to the student body.

TD: What are you most excited for about being president?

JG: Speaking with past student body presidents, there’s a lot of — you know, I’ll be real here — there’s a lot of fun stuff you get to do. There’s a lot of cool meetings you get to attend, a lot of interesting and crazy people you get to meet just from being in the position, and I’m incredibly excited for those opportunities. I’m honored to be able to say I’ll be meeting with Larry Zimpleman for the presidential search committee. I get to sit on the committee that searches and eventually selects the new president for Drake University, so obviously that is a huge, huge part I’m excited about. I’m also excited about the “5-star” plan I campaigned on. I want to carry out each and every one of those promises I set during my campaign. I told every student that this is what I wanted to do and that I would do my best at carrying those out. But obviously, there are some things I guess I’m not excited for, you know. There’s a lot of days when academics will be tough, and there will be a lot going on, and I’ll have to set an agenda and get things up to speed. So there’s obviously a lot of fun, exciting perks for the job but also a lot of dedication and time being put into this position. I’m excited regardless. I’m excited for those tough nights, those tough decisions and the choices that come with that.

TD: What challenges will you have to overcome in order to carry out your goals?

JG: Again, touching back on to that precedent. There’s a lot of things that have been done at Drake and we typically say, “That’s the way it was done. Let’s keep doing it that way,” and a lot of challenges will be overcoming those. I’m not afraid to say, “Why not? Why can’t we do this? Why can’t we change that?” I want to be able to fight for those things that students really want, so I see that as one of the biggest challenges. University-wide, one of the biggest challenges for students is paying tuition. You know, tuition prices have been increasing every single year since I’ve been a student here, and it’s one of the things David Karaz addressed with the Board of Trustees this past January. I hope to do it again this fall and share with them that you come to Drake and you expect a certain level of service, and you’re paying a certain amount, and if prices are going up and services aren’t improving or staying consistent, then what’s going on there? I think that will be one of the biggest challenges as well.

TD: With whom will you be working with the most closely during your term?

JG: I work with the vice president of student life, Josh Duden, and the vice president of student activities, who also serves as the president of SAB, and that is Adam Graves. I’ll be working with them pretty much day in and day out. I’m extremely excited to work with them. They’re both incredibly passionate about what they do. I’ll be working with Ann Miller, the associate dean of students, who also works in the Student Life Offices in Olmsted. She is the faculty advisor who oversees the Student Senate, so I’m excited to work with her. I’ve had a fantastic relationship with her this year with Student Senate. We’ll be working a lot with President Maxwell this year as we transition into finding a new president, Dean of Students Sentwali Bakari, Provost Deneese Jones, as well as a large amount of other individuals.

TD: Tell me about the Senate 60 plan.

JG: Senate 60, like I stated earlier I believe, is a set of goals, projects, initiatives, that I want the 28th Session, the session this coming year, to focus on and essentially revolve around working on what students want. So we’re going to reach out to students, potentially in the form of a survey, and we’ll send that out to the student body, and it will simply ask for feedback, for ideas, and what they want to see their student government do. We’ll take that feedback. We’ll work with it over the summer. We’ll prepare it into the Senate 60. We’ll share that back with the students of what our goals are, and then we’ll work at executing those goals throughout the year. Obviously, I don’t anticipate accomplishing every single goal on the list, but my hope is that each goal will be addressed and each goal will have some form of a definition saying either a) we accomplished it or b) we couldn’t accomplish it because of “XYZ.” With the Senate 50 this year, we didn’t accomplish every goal, and it wasn’t the expectation to accomplish every goal, but we addressed every goal, and we looked into it, so I’m excited to get all that rolling here within the next few weeks.

Title IX and other safety measures