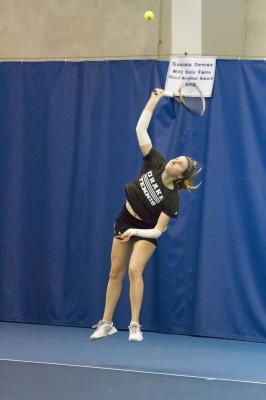 After losing the doubles point, the Bulldogs won all six singles matches to bury the Panthers.

For sophomore Mariel Ante, the Bulldogs’ preparation and desire were vital to their first Valley win.

“We’ve trained harder. We do more than them, and the fact that they just did nothing for spring break tennis-wise — I guess that should’ve fired us up,” Ante said. “We just out-competed them, and we just cared more.”

Sophomore Jordan Eggleston tied the score at one, beating Sydney Wolfe, 6-2, 6-2 on court No. 5.

Maddie Johnson continued her strong spring campaign. She overcame Elvira Lopez, 6-2, 6-2, to give the Bulldogs a 3-1 advantage.

Sophomore Lea Kozulic clinched the winning point for Drake at the No. 6 position, edging Krissy Lankelma, 6-1, 6-3.

Even with victory no longer in doubt, the Bulldogs still took the matches on No. 1 and 2.

It was the first time Ante played the No. 1 spot since Feb. 15, when Drake hosted D-III Gustavus Adolphus.

“I chose not to think of the number,” Ante said. “It’s just the same match.”

The contest didn’t start in a promising fashion.

Medlin and Stroobant achieved a rare feat by beating Boyd and Eggleston on court No. 1, 8-3.

It marked the first doubles loss for Boyd and Eggleston in 2014, dropping their spring record to 9-1.

Johnson and Rebol kept Drake in contention for the doubles point. They held off Lankelma and Wolfe, 8-5.

However, that was not enough as Ante and Kozuliz were just barely unable to reign in Lopez and Santos, 8-6.

It was the first time this season Drake won a match without winning the doubles point.

Ante stressed the importance of a “one day at a time” mentality, hopeful that it will lead to a MVC championship.

“We have goals. Of course, when you have goals, you’re going to have to do whatever it takes to achieve those goals, and in doing so, it’s taking the match one at a time, working hard,” Ante said.

Drake’s quest for the title goes through Evansville on Saturday and then Southern Illinois on Sunday.

Drake currently sits atop the Valley standings at 12-3 with SIU in second at 12-6.

The Bulldogs know they have to bring their best game to every match, home or away.

“They’re going to come out after us. Coach always tells us that we have targets on our backs, that Evansville is good, and all we have to do is just do what we do,” Ante said. “Juice it.”

Students reflect on their fall experiences