Student-athletes have a lot on their plates. Not only are they full-time students, but they also have to balance hectic schedules with practice and games along with being flexible with their schedules.

They have to have meetings with coaches, go to weights, practice and basically look at their sport as a job.

The Times-Delphic: How did you end up at Drake?

Dantzler: I ended up at Drake because it wasn’t too far from home. I live in Nebraska, so it’s only about two hours away.

I really like Drake because it’s a small school, which is similar to my high school. I really liked the girls and the coaches when I visited, and I really like the color blue.

Enevold: I struggled in school, and a lot of schools didn’t want to bother with recruiting me because of that. But assistant coach (Todd) Townsend did everything he could to make it work, and that’s why I chose Drake.

Essentially, because I knew if they put that much effort into getting me here, it would be a good fit.

Dodds: I came here for the entrepreneurial management major, and I actually walked onto the football team.

I was a manager my freshman year and then the following winter, they gave me the chance to try out. I didn’t actually get recruited.

Platte: I went to Drake because it was a high academic school, and it was a small school but it was still Division I athletics. I also liked that it was in-state because I’m from Iowa. 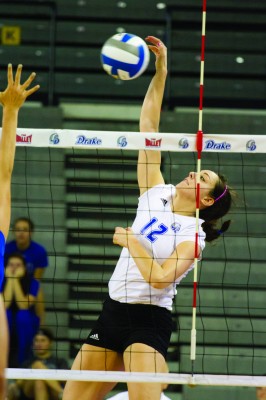 TD: What is your favorite part about being a student-athlete?

Dantzler: I like that we are kind of a like a community. The athletes stick together and look out for each other.

In the training room, we are always checking in on how everyone is doing. You’re in a family immediately that’s bigger than just your team.

Enevold: My favorite part about being a student-athlete is definitely playing basketball. I get to be a part of a brotherhood with my team.

You don’t really get those kinds of bonds with anyone else, so that’s definitely the best thing of it, too. It’s generally just playing the sport I love.

Dodds: It’s cool to be a part of something bigger. It’s nice to have someone that’s always there to keep you accountable and look out for you.

Being on the football team, we have such a big team. It’s like you could eat anytime you want, and there’s somebody else there. It’s usually me.

TD: What’s the hardest part about being a student-athlete?

Dantzler: Waking up early when there’s no light outside during a workout. That’s usually the hardest.

Enevold: The hardest part for me is to balance basketball and school. That’s where I’m struggling the most. And of course, that it’s hard to work out, but that’s what it is.

Dodds: Time management. Just being able to get all your schoolwork in around practice and lifting and all that stuff. It’s just hard fitting everything in.

Platte: Just being flexible, you know, when your coach texts you and says be in Hubbell in 10 minutes to eat with a recruit. It’s also hard to keep up with changing practice times.

TD: Some people say that when you’re an athlete, you don’t get the whole college experience. What is your opinion on that?

Dantzler: I would say that you get the college experience, but you also get a little bit more. We get to travel to awesome places, and it’s a sacrifice.

There are a lot of people that do fraternities and sororities, and I wanted to try that, but I chose basketball over that. You lose a part of it, but you also gain a huge part of it with traveling and playing games in front of a lot of people, which is awesome.

Dodds: Being on the football team, because we are so big, is similar to being in a fraternity, except it’s better.

When does a fraternity wake up at 5:30 a.m. to work out together and to fight next to the people who want the same goal? You get to know each other better, and I think it’s a better experience than a typical college experience.

Platte: I think it just depends on what you define as a college experience. Everyone gets a different experience. 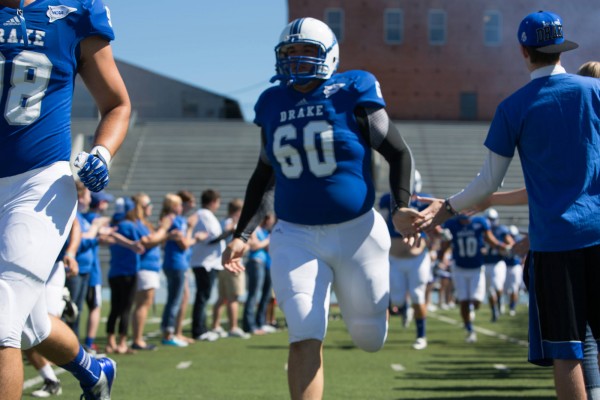 TD: How do you balance life as an athlete with school?

Dantzler: I have a planner that I carry around and make sure everything is penciled in. That’s really the only way you can do it. If we’re traveling, I use that time on the bus to do homework.

Enevold: I don’t manage my time really well. I’m just going with the flow. It’s a struggle of mine.

Dodds: I’m still struggling with it, too. I have the notes on my desktop that I can write down what I’m doing for that week and figure out what I have to get done.

I have to flip through my football schedule and see where something is, and it’s still something I’m working on. I’ve never used a planner in my entire life.

TD: Are there any misconceptions about student-athletes that bother you?

Dantzler: That we’re all dumb and that we don’t support other activities that are on campus, like theatre.

Enevold: Well, I definitely feel that like for the basketball team, a lot of people see us as celebrities. I mean this is what I hear from people that they see me as a celebrity, but that is definitely not what I think.

I think it’s a misunderstanding. I know I’m pretty tall, but that’s kind of it. That doesn’t make me a celebrity.

Dodds: I think for us, everyone thinks that we’re jerks, douchebags, fill a number of titles there.

I feel like the general student body just despises us. I don’t know if it’s because we’re such a big team, but I feel like they don’t like us. They think that we’re just typical jocks.

I hear in Hubbell how people are like, “Oh that’s the athlete table, and there’s the fraternity and sorority table.” And I don’t think we’re similar. It bothers me. I feel like we put in so much more effort and time and blood and sweat.

TD: What has been your most memorable moment so far at Drake?

Dantzler:  I will always remember when Britt Schuling made the last penalty kick to get us into the MVC tournament.

We weren’t doing really well in the season, and we still got into the tournament and it was awesome. We just got to see all our hard work pay off.

Enevold: There are a lot of things to pick from. I can’t really pick. It’s just all been a really great experience for me.

Dodds: When we won our first championship, and I want to say when we also won our second championship because I actually helped for that one.

Platte: Meeting with my advisor, and he helped me set up my whole career path, basically.

From manager to cornerstone: kicker Josh Lee ahead of final game