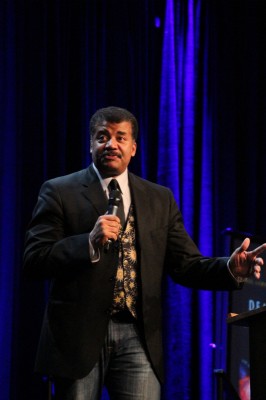 Considering how much of his time is spent thinking about the cosmos, world-renowned astrophysicist Neil deGrasse Tyson kept a surprising majority of his focus within Earth’s atmosphere during his lecture Tuesday night at Drake University.

Over 7,000 people were in attendance at the Knapp Center to hear Tyson’s lecture, filling the arena to near capacity. It was entitled “The Sky is Not the Limit,” and was the 31st lecture in the Martin Bucksbaum Distinguished Lecture Series.

Throughout the lecture, the astrophysicist used his unique blend of humor and gravitas to examine the United States’ various downfalls from the zenith of the global scientific community. With a PowerPoint presentation of graphs, charts, maps and images, Tyson compared various statistics of countries across the globe with the United States.

“I am going to tell you things you won’t find anywhere,” Tyson said at the outset.

Oftentimes the statistics spoke for themselves, like those regarding the global engineering discipline. One graphic showed that the United States and India average 50,000 and 70,000 engineering graduates per year, respectively. China, on the other hand, graduates 500,000 engineers every year on average.

To emphasize the differing global perspectives of the sciences, Tyson showed the currency of several European and Middle Eastern countries.

Rows of images showed foreign currency adorned with the busts of famous scientists, mathematicians and inventors.

When the United States’ $100 bill came up, Tyson was quick to point out the while Franklin was a scientist, that was not the reason for his appearance on the bill.

“He’s on there for being a founding father,” Tyson said. “We’re honoring our politicians, and Europe is honoring its scientists.”

This enforced a larger point Tyson enumerated throughout the lecture about an existing scientific illiteracy in the United States. He used the recent 2012 apocalypse scare as a glaring example.

He revealed that one of his greatest fears is having extra-terrestrial life stumble upon Earth and discover that it holds “no sign of intelligent life.”

To illustrate how far the United States’ aerospace standing has deteriorated, Tyson spoke of Russia’s proposed mission to deflect the Rose Bowl-sized Apophis asteroid away from the Earth when it approaches in 2029. He lamented the back-seat role the United States is taking in the matter.

“Normally, we would have led the charge and said ‘Who’s with us?’” Tyson said.

Despite the alarming statistics about United States scientific inadequacies, Tyson remained optimistic for the future.

“There is hope,” Tyson said. “It’s rising up from the grassroots level.”

Tyson concluded his lecture with a poignant reading from famous cosmologist Carl Sagan’s book, “Pale Blue Dot: A Vision of the Human Future in Space.” A fitting move, as Tyson will be reviving Sagan’s popular television show “Cosmos: A Spacetime Odyssey” this spring on the FOX network.

When the lecture concluded, Tyson was given another standing ovation by the audience. A question and answer session and a book signing followed the lecture.

Sophomore Alex Peterson wasn’t quite sure what to expect of the astrophysicist’s lecture coming into Tuesday. By the conclusion, he was most struck most by a graphic which illustrated the United States’ declining trend in the publication of scientific papers.

Peterson said he does not see Tyson as only an advocator for the sciences, but as “inspiring on an individual level.”

“Nobody has done what he has done,” Peterson said. “There’s hope that people can still do things that no one else has done.”

Junior Pat Moarn was a fan of Tyson prior to the lecture mainly because of his distinctive combination of comedy and science.

“His humor and how he connects his points with pop culture is a great way to get his points across to the public,” Moarn said.

The statistic of how many engineers the United States graduates each year compared to India and China is what astonished Moarn the most.

“It put it in perspective of how much we’re losing ground on growing economies,” Moarn said. “(It’s) really shocking.”

First-year Mackenzie Grimes was “overwhelmed” at the turnout for the lecture.

“Drake was well-represented, as were people from the community,” Grimes said.

While no one fact left an unshakeable impression on Grimes, he was stunned with some of the “general facts” that Tyson shared, such as the actual cause of the flooding after Hurricane Katrina in New Orleans, “faulty engineering.”

“I was scared for the sake of America in how we paled,” Grimes said. “Not just in terms of achievements, but attempts.”

The Martin Bucksbaum Distinguished Lecture Series will continue with American writer and biographer Walter Isaacson at 7:30 p.m. on Nov. 21 in the Knapp Center.

Commentary: An argument for understanding

College athletics worth the sacrifice