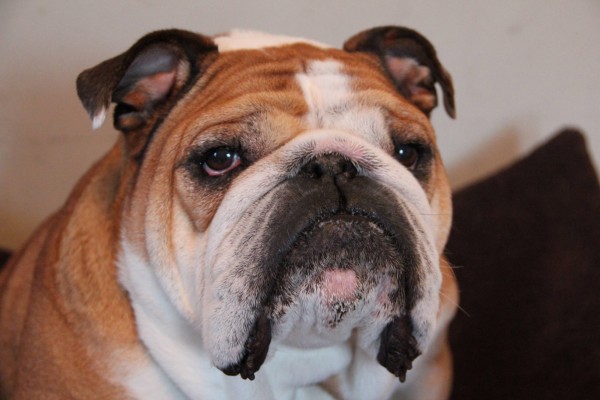 What has four legs, can dribble a basketball (well chase after one), win a beauty pageant and be a mascot all in one? That’s right, Porterhouse, the unofficial mascot of Drake University. Behind the irresistible bundle of fur and slobber lies a very special bulldog with a very important story.

Kevin and Erin Bell, Porterhouse’s owners, got him when he was just a puppy. Sharing a love of dogs and a distaste for puppy mills, a type of breeding ground where the only goal is to make a profit regardless of what happens to the dogs, the Bells did extensive research and even contacted the Bulldog Club of Central Iowa to make sure that wherever they got an English bulldog from would not be a breeding farm or pet shop.

Porterhouse, who was 10 weeks old when he was adopted, has had a massive impact on the Bells. Erin Bell even believes Porterhouse is the reason they continue to adore bulldogs.

“He (Porterhouse) was the first bulldog we ever owned, and he is far from the last,” Erin Bell said. “He is the reason we fell so in love with the breed and inspires us to help other bulldogs that are much less fortunate and need rescuing. We can’t imagine our family without him.”

Turning eight years old on March 31, Porterhouse has achieved more than most dogs ever will. Named as a dog that is changing the world by “LIFE+DOG” magazine, Porterhouse does more than just chase a basketball onto the court. He is a certified therapy dog and frequently visits hospital patients to raise their spirits. In relation to Drake, Porterhouse is the first live mascot Drake has ever had.

Kevin Bell told the story of Porterhouse’s part-time-job-turned-career with Drake.

“Porterhouse was crowned the Most Beautiful Bulldog in 2009 on his fourth attempt,” Kevin said Bell. “We were shocked but honored. The opportunity to have a dog that is the mascot for a university is certainly unique and has been a great experience for all of us. We initially thought the responsibility would only be for a year, as was historically the case. Porterhouse, however, was asked to continue as Drake’s official live mascot after his reign as the Most Beautiful Bulldog. We’ve embraced the opportunity to share him with so many people over the past four years. Not everyone gets this chance.”

In this proud Drake supporting family, Porterhouse is not the only loveable canine in the house. He has two siblings, a younger brother, Magoo, and a younger sister, Oreo. Erin Bell lovingly refers to Magoo as Porterhouse’s athletic trainer.

“He (Magoo) is much more playful, fit and active than Porterhouse, so he keeps Porterhouse in shape,” Erin Bell said.

Magoo is equally as wonderful as Porterhouse, but completely different. Oreo, on the other hand, is an extremely gentle and sweet bulldog that the Bells adopted after she was rescued from a cruel puppy mill by Illinois English Bulldog Rescue (IEBR). There are also sometimes additional bulldogs from the IEBR who stay with the Bells temporarily until they find a new loving home.

When asked if Magoo or Oreo would ever replace Porterhouse as Drake’s mascot, the answer was a very definite no.

“Magoo would not enjoy the crowds and loud noises, etc. that Porterhouse embraces and thrives off of,” said Erin Bell. “It wouldn’t be fair to Magoo to put him in those situations that are overwhelming and stressful for him, as they are for the vast majority of dogs. Porterhouse is definitely unique and not your typical dog. There’s never been a more laid-back and tolerant dog than him. He was made to do this.”

Want to help out bulldogs or thinking of adopting one? Take a look at www.ilenglishbulldogrescue.org or the Illinois English Bulldog Rescue Facebook page.

The Times-Delphic ·
@timesdelphic
At 7:56 a.m. this morning, a pedestrian-car crash occurred on the crosswalk from 27th Street coming across Forest Avenue. A first-year student was hit.
View on Twitter
1
6

The Times-Delphic ·
@timesdelphic
An email from Scott Law and Jerry Parker at 4:50 p.m. Tuesday states that there is an increase in reports of car break-ins and thefts at Drake and the surrounding area.
View on Twitter
0
2

Churning out leads to burnout: how to combat the catatonia

Do you have what it takes to be a Drake intramurals official?