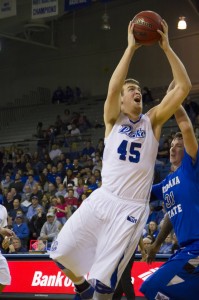 When the Missouri Valley Conference foes played on Jan. 16, Evansville controlled the tempo to take a 10-point lead with 10 minutes left in the opening half. Ten minutes later, though, Drake entered halftime with the lead.

That shift in momentum translated into a Bulldog victory. Though Drake dispatched Evansville in January, the Purple Aces stand a threat on Sunday. Evansville senior Colt Ryan spearheads that threat. Ryan averages 17.8 points per game. He leads the Valley with a staggering 89.4 percent accuracy from the charity stripe.

Evansville senior Ned Cox likewise stands a threat. Besides averaging 11 points per game, Cox has drained 91 3-pointers this season en route to 41.8 percent shooting from behind the arc.

Expect the Drake defense to zero in on Ryan and Cox.

The Bulldogs’ composure on the road likewise stands a threat on Sunday. The Bulldogs own a 2012-13 ledger of 11-11 overall. Drake has dropped 8-of-11 losses away from the Knapp Center.

With the excitement of Saturday’s overtime victory still lingering on campus, Drake will look to parlay that energy into Sunday’s showdown at Evansville. The Bulldogs defeated Indiana State 74-71 in overtime on Saturday. Saturday’s unpredictable plot included a half-court shot by junior Gary Ricks Jr., a trio of consecutive 3-pointers by senior Ben Simons and clutch inside play by freshman Joey King.

The Bulldogs played with consistency throughout the overtime thriller, to Drake head coach Mark Phelps’ satisfaction.

“There were quite a few moments where we had to demonstrated toughness, some perseverance, some poise and composure, and I thought we answered those each and every time,” Phelps said after the victory.

A 0-4 start in MVC play has since given way to an optimistic, improvement-minded Bulldog squad.

“Obviously, we didn’t start out the way in Valley play we would have liked, but it was what it was, and we’ve been playing better basketball as of late,” Simons said.

Fifth-year senior Chris Hines expects that improvement to translate into a Drake victory on Sunday.

“I think we have grown as a team, and I think we’ve stepped up as a team on the defensive end as on the offensive end,” Hines said. “I think it will go hand-in-hand with wins.”

Drake faces Evansville at 7 p.m. on Sunday in Evansville, Ind.

Volunteering a priority for Drake students

The Times-Delphic ·
@timesdelphic
Drake Public Safety was informed around 5 p.m. Sunday by a third person account that someone saw "an individual by Mars Cafe carrying a rifle," according to DPS Assistant Director Tricia McKinney.
View on Twitter
2
3

Drake men climb to No. 63 in national rankings