One of the available representative positions on the Student Senate Body is the First-Year Senator position. First-Year Senator is a delegate from the first-year class and they set a tone for the year based on a platform of their choosing. The first round of voting for the First-Year Senator position was Sept. 21 and there was a runoff election between two out of the seven candidates: Sydnei Washington and Sarah Hutchison. Student Senate is a representative body at Drake, who, according to their website, “commits to upholding the interests of its constituents as its highest priority by bringing students’ opinions to the forefront and providing solutions to the needs of the University through legislation and open communication to ensure the present and future success of Drake University.” 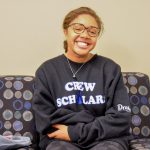 Sydnei Washington, an elementary education major, is running on the platform of equity, inclusion and community engagement.

“To me, with those three things, if everyone has a little piece of that they definitely will have a great experience at Drake,” Washington said.

Sarah Hutchinson, LPS and graphic design double major, said she is running on “the idea of fostering inclusivity, promoting social and academic success and making sure everybody’s mental health is accounted for.”

The runoff elections occurred Sept. 27-28, and students were asked to revote, this time for either Washington or Hutchinson.

“For first-year senators, since there’s just one position, the rules are they have to get 50 percent plus one of the votes … but neither of the top two got that,” said Delia Koolick, the election commission chair for Student Senate..

No one managed to secure this majority, so the two top candidates had to compete in the runoff. Voting was accessible online through MyDrake for the first election as well as in the runoff election.

This runoff was important because “everyone else who voted for other people can redo their votes for the two in the race and anyone who didn’t vote can vote,” Koolick said.

When discussing the runoff, Washington talked about how excited she was and that she was happy to work with Sarah.

“She is very kind,” Washington said. “I really loved being able to see her and see me run.”

The two girls have been working together during the runoff.

“Finding out about the runoff election was really exciting because I really love Sydnei,”  Hutchinson said. “I think she is cool and being able to work with her and talk with her about things was such a rewarding opportunity.”

The Student Senate has a different personal definition to many students at Drake. The two candidates elaborated on what they believe Student Senate is and why it matters.

“Student Senate is a leadership body on campus that helps students reach their goals and make sure that campus is a welcoming environment for everybody,” Hutchinson said.

“Student Senate, to me, is a place where all members of Drake get a voice,” Washington said. “They get to allocate funds, they get to set up programs and get to do a lot of different things that affect the community at Drake.”

On Sept. 28, the results were announced after another week of running and Sarah Hutchinson was named the First-Year Senator.

Washington says she still plans on being involved in Senate and hopes to work with Sarah again. For more information on Student Senate or how to get involved, go to the Student Senate website.