The great heroes of sport are rarely those that were expected to succeed. Michael Jordan was cut from his high school basketball team, New England Patriots quarterback Tom Brady wasn’t picked until the sixth round of the 2000 NFL Draft and Drake’s own Adam Emmenecker, who led the Bulldogs to the Men’s Basketball NCAA Tournament in 2008 for the first time since 1971, had been a walk-on for the Men’s Basketball team the three previous years.

However, heroes don’t always make their names on the field, but can sometimes rise in other forms, rising out of the shadows to save the day. And now, it seems that Drake has one such hero.
The Drake Mask is an individual who attends nearly every home basketball at the Knapp Center, supporting his school and distracting their opponents, helping the team he loves in whatever way he can from off the court.

“No one I know knows who he is, which kind of adds to the excitement,” senior point guard Carly Grenfell said. “He’s a diehard fan and it is pretty cool to see his literally unwavering support. He’s at every game and it’s definitely pretty cool to have that.”

The Mask agreed to meet for an exclusive interview, but wished to keep his true identity secret, as so many other great heroes do.

“I can’t score baskets on the court, but I do hope that people get some enjoyment watching me cheer on the team or going crazy after the made shots,” The Mask said. “It’s something I’d like to have more of, more people not necessarily showing up to the game in masks, but their cheering on the team really excited about everything.”

The Mask first appeared during the 2013-2014 basketball season and has brought many to speculate where his origins lie, but he has sworn to never disclose that information. 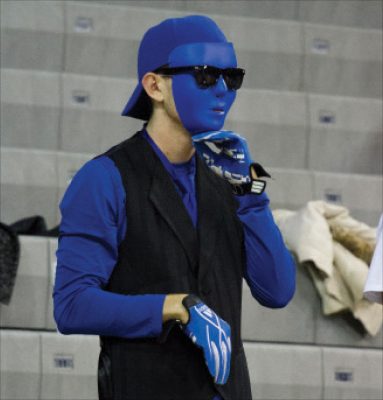 “I started wearing the mask because I thought it would be fun to show up to games and not have to worry about acting too crazy or getting on the refs’ nerves,” The Mask said. “It really gives me the freedom to do a lot of things normal people might feel embarrassed or ashamed of doing. I’m not the kind of person who cares about that type of stuff, but it just gives me the opportunity to not worry about people who would say ‘You’re that kid who goes crazy at basketball games.’”

Avoiding those remarks from his classmates is exactly why The Mask wants to keep his identity secret.

“It’s two separate things,” The Mask said. “It’s me as a school student, serious about my school studies, but at the same time I want that outlet where I can just do whatever I want.”

That freedom not only helps The Mask express himself and have fun, but also helps get the crowd into the game and support the team on the court.

“The intensity he brings, rattling the other team and knowing that we’re going to have an intense environment, having the Knapp Center being a tough place for everyone else to play,” freshman guard Reed Timmer said.

That hostile environment for opponents to play in seems to be making an impact in games. In the two years since The Mask’s first appearance, the Bulldogs’ home winning percentage has improved significantly for the Women’s Basketball team and held steady for the Men’s team when compared to their road winning percentages (see graphic at right).

“I would like to think that the fans have an impact on the games, at least a little bit,” The Mask said. “I can try to do something to try to get into the other team’s head before the game by staring them down … or dancing to break their focus while they’re trying to shoot free throws. I’ll do pretty much anything so that our team can win.”

One of The Mask’s advantages is that he doesn’t need a phone booth to get into character, but simply needs to get into the basketball mindset and strap a simple piece of blue plastic over his face.

“It’s a comfort… knowing that one guy is going to be there all the time, being as crazy he can, motivating our fans to be as crazy as they can.” Timmer said. “It really helps us create the atmosphere we want here at Drake.”

“I think The Mask just embodies everything Drake stands for and his presence, whether he’s dancing in the student section or distracting free throws,” Grenfell added. “It’s huge and it really means a lot to us.”

The players’ responses are what The Mask wants to get out of them, to motivate them to play better, which in turn makes his job of energizing spectators easier.

“When the student section gets into it, it makes it a lot more fun for everybody else,” The Mask said.

The only times that The Mask has been seen are during Drake’s athletic events. The Mask can be found @DrakeMask on Twitter, and perhaps may be spotted living out his alter ego attending classes as a dedicated Drake student.