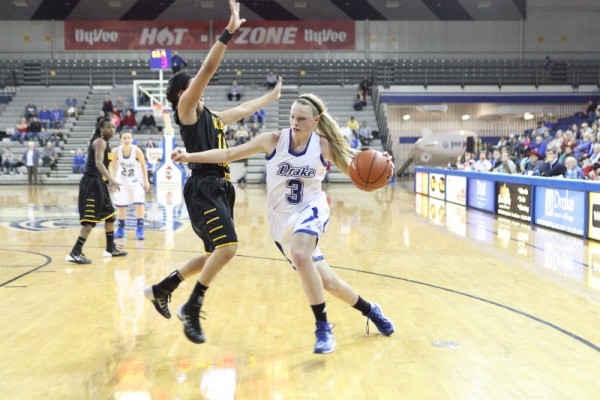 The Drake women’s basketball team was seeded fifth in the Missouri Valley Conference Tournament and made it to the championship game against Wichita State. However, their whirlwind tournament came to an end in a loss, 73-49.

“I was really excited that we weren’t in the play-in game, and that takes a lot off of your body, not having to play in that game,” junior Kyndal Clark said. “It was the first time that we got to just watch the games on Thursday and mentality-wise, I just wanted to go in and have fun. We started against Evansville, and they were on their big swing. They were playing really well and we knew we had to come out and perform, but at the same time, we weren’t expected to win. We were the underdog, so we had no pressure.”

After beating Evansville, the Bulldogs next faced top-seeded Indiana State. Indiana State had beaten them twice this season and the Bulldogs were not slated to be the victors. However, Drake duked it out and took the win 66-58.

“Everyone showed up, and it was completely a team win. We knew that we could do it, and we were probably the only ones, but it was really cool to make it that far.”

Going into halftime, the Bulldogs trailed the Sycamores 32-27.

Following the first half, the Bulldogs came out guns blazing and went on a 10-0 scoring run. Wendell and Clark once again stepped up for the Bulldogs, each scoring 20 points.

Grenfell also came off the bench and made a big impact on the team with six points, seven rebounds and three steals.

Wendell was unable to be a big factor in the second half as she fouled out and only was able to play 27 minutes.

However, freshman Caitlin Ingle stepped up for the Bulldogs with 10 p

Throughout the entire tournament, the Bulldogs were supported by the players off of the bench.

Sophomore Emma Donahue was able to come in and make clutch shots against Indiana State and Evansville that pushed the Bulldogs to victory.

“I feel like every year Emma just shows up at the tournament and is just really a huge spark off the bench for us,” Grenfell said. “In the Indiana State game, she was pivotal for our success, and it was really cool to see.”

After taking down the Sycamores, the Bulldogs went into the championship round against the Wichita State Shockers.

“I had a strange feeling before we ever got there that I thought we were going to make it to the championship game,” Clark said.

“It was going to be tough. It was going to be hard, but we had no pressure on us. We weren’t supposed to be there. I was proud of our young team, our undersized team, our team that has been through so much and that was able to work through everything and be in that position.”

The Bulldogs weren’t able to pull out the w
Wendell continued to make her mark and scored 20 points and Clark had a double-double with 15 points and 10 rebounds.in, though, against the Shockers and lost 73-49.

The Bulldogs were outsized by the Shockers and did not seem able to find their rhythm like they had in the previous games and were unable to defend the ball.

Wichita played tough defense and was able to force 12 turnovers and converted 15 points off them.

The Bulldogs look toward next year for redemption.

“Obviously making it to the championship and then losing it wasn’t ideal, but we had a winning record after the tournament and were close to making postseason but ended up not getting in,” Grenfell said.

“It’s a huge step in the right direction for the program. If you take into consideration our season from last year, it was completely different this year. We have three new freshmen coming in, and hopefully, they can come in and make an impact as well. I’m extremely excited for next year.”