The Nearly Naked Mile is an annual tradition at Drake University and despite the risqué name, the event has the best intentions.

The mile is a clothing donation drive.

Participants come wearing an assortment of clothing they are willing to donate.

They then run the mile, strip off the clothing and try to finish as quickly as possible.

The clothes are donated to Goodwill.

By the end of the race, most participants are only in their undergarments, hence the name.

The mile was different this year than in previous years.

In years past, the Nearly Naked Mile was an independent activity, headed by the Student Alumni Association (SAA), but this year it was combined with the homecoming activities.

In partnership with the Student Activities Board (SAB), SAA advertised the mile as a homecoming event to “reach people outside of the SAA, and to make the event seem less exclusive,” said Annelise Tarnowski, SAA vice president of campus involvement.

Tarnowski, with help from several advisors, planned the entire event and the charities involved with it.

Speaking on the origins of the event, she said, “Many colleges have this event, so we decided at the beginning of SAA four years ago that we should also have this event.”

The event was popular and has a particular draw.

“I think student like to participate in the Nearly Naked Mile because it’s a goofy event, with the opportunity to do something a little bit crazy,” Tarnowski said.

The event has grown every year. 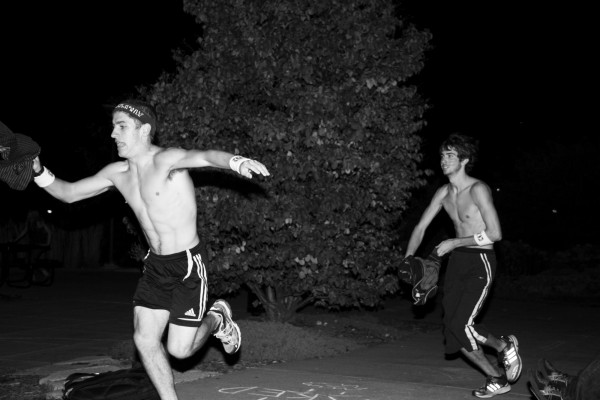 With the collaboration of the SAA and the SAB, it is no wonder that this year saw a large crowd, with around 30 participants and many more observers and walkers.

First-year Chris Oberholtzer said he was excited to participate in the mile.

Dressed in an assortment of items, Oberholtzer said, “I’m overly excited. I think that this is a good activity.”

Oberholtzer, like many participants, heard about the event through posters around campus.

The third-annual mile started around 9:30 p.m. on Thursday at Meredith.

The runners traveled around campus and ended at Drake Stadium among a crowd of cheerleaders and football players.

Around 30 students ran the mile, each fully garbed in ridiculous outfits ready to be donated.

At each of the three stops along the race, they shed their clothes before taking off again.

The winners of the race lined up on an Olympic-style podium, and after they were awarded the win, the race was officially over.